In the 1770's, the site of Cobden House was owned by the family of Edward Byrom (hence, Byrom Street). The area must then have been open land. Just 30 years before, Byrom Street had been the artillery park of Bonnie Prince Charlie’s Army.

The Byrom family lived in Byrom House, a building between Cobden House and what is now the Granada offices. Edward Byrom arranged for the preservation of the meadows around Byrom House. What would he make of the locality now?

Edward Byrom was a co-founder of Manchester’s first Bank, Byrom Allen Sedgwick and Place, but he died in 1773 leaving Byrom House and its freeholds to his daughter Ann, who was married to a Barrister, Henry Atherton of Middle Temple.

In 1775, Ann sold the plot of land for Cobden House to one of her father’s partners, William Allen. By the end of that year William Allen was in occupation of what must have been Manchester’s most elegant town house. He even had his initials on the iron work of what were then external stairs from Quay Street, which you can see in this print. Allen sold the Building in 1785 to William Hardman, but then fell on hard times and in 1788 his Bank was sold to the Heywoods, whose Bank is now the Royal Bank of Scotland in St Ann’s Street.

William Hardman had acquired a large fortune as a drysalter (a dealer in chemicals used in drugs, gums, foods etc.). He was a lover of the arts and built a music room for private rehearsals of gentlemen’s concerts. In the print on the cover, the music room can be seen below the tower of St John’s Church. On his death, his son Thomas continued to live here, until it was sold in 1828.The next owner was Oswald Milne a Manchester Solicitor with offices in St James’ Square.

Richard Cobden was probably Manchester’s most influential statesman and politician. Although born in Sussex, and having begun business in London, he moved to Manchester in 1832 to run his calico printing factory. He was exhilarated by the City and soon became it’s leading radical. 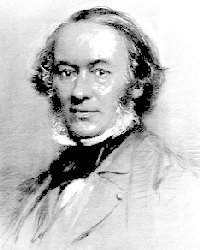 He bought this house in 1836 and his ownership coincided with his meteoric political rise. He was elected to the Manchester Chamber of Commerce in the same year, and from that time on, the Chamber became the vehicle for the campaign for which he is most remembered, the repeal of the Corn Laws.

Cobden’s springboard to political influence was his campaign for Manchester to be incorporated as a city, which he achieved in the summer of 1838. He threw himself into his anti Corn Law movement and was elected MP for Stockport in 1841 and was described by Disraeli as "the most persuasive speaker I have ever listened to". Cobden’s campaign was successful and the Corn Laws were repealed in 1846. So great was Cobden’s stature that a public subscription raised £80,000. Cobden’s health had suffered and in his absence on the Continent he was elected MP for the West Riding, and later was elected for Rochdale. On the 29th April 1850 Cobden sold the building to Messrs George Faulkener and Stephen Heelis. George Faulkener was a close friend of John Owens, a wealthy Manchester merchant of non conformist beliefs. Owens had bequeathed £96,000 for the foundation of a college which did not require the religious tests then necessary at every other British University, where adherence to the Church of England and the learning of divinity was required. Owen’s College was opened on the 12th March 1851 with 7 staff and 25 students. The building did not lend itself to University life but appears to have been chosen because of the magic of Cobden’s association. Some writers complained of the squalor of the surroundings, and the unwholesome attractions of the nearby "Dog Inn" as a distraction to the studies of the undergraduates. As though students, in any age, would ever contemplate entering a low tavern!

As a new foundation the College had its reputation to build before students came in numbers, and the early years were difficult. Professor Scott, the first principal took up the cudgels in 1858 and spoke out in favour of the excellence of the teaching. The local papers followed suit, encouraging young Mancunians to study in the heart of their great city. From 1859, the College thrived. Unlike other Universities it was non residential, was all male, and had a curriculum meant specifically for the people of the region. By 1873 when the College moved to its present site in Oxford Road numbers had risen to an amazing 334 day and 557 evening students. 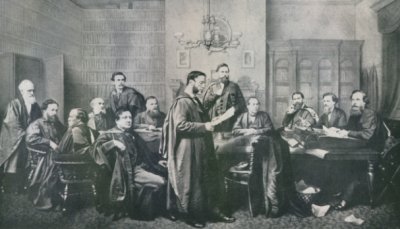 The site was bought for £13,000 in 1874 to be the home to the Manchester County Court, which opened in 1878. On the land to the rear, two County Court rooms were erected, with Cobden House being used for Chambers hearings and for administrative uses. Later, the Court took over the Victorian School House adjoining St John’s Gardens for use as Registrar’s Chambers, with some Registrar’s work continuing in Cobden House. About the turn of the century, the elegant Ionic portico and exterior staircase were replaced by internal stairs and the more severe Doric columns that exist today. One of the Judges who sat here was Judge Parry, who in his autobiography wrote:- "I was on the point of saying that I had no unpleasant memories of Quay Street, but that would scarcely be correct, for it was in that Court that I had the misfortune to be shot". In those days Judges controlled the Bailiffs and Parry had revoked the certificate of one William Taylor. Parry was sitting late, when Taylor burst into his Court and shot at him three times, hitting him twice in the head.

In the last 30 years no work was done on the building and it gradually became more decayed. First, the Court rooms were moved to 184 Deansgate, then the administration was transferred to Crown Square, and on the 26th January 1990 Quay Street closed its doors as a Court.

This grade II listed building, which has been completely refurbished to its Georgian splendour is now the home of Cobden House Chambers. The following pictures show the full extent of the refurbishment.